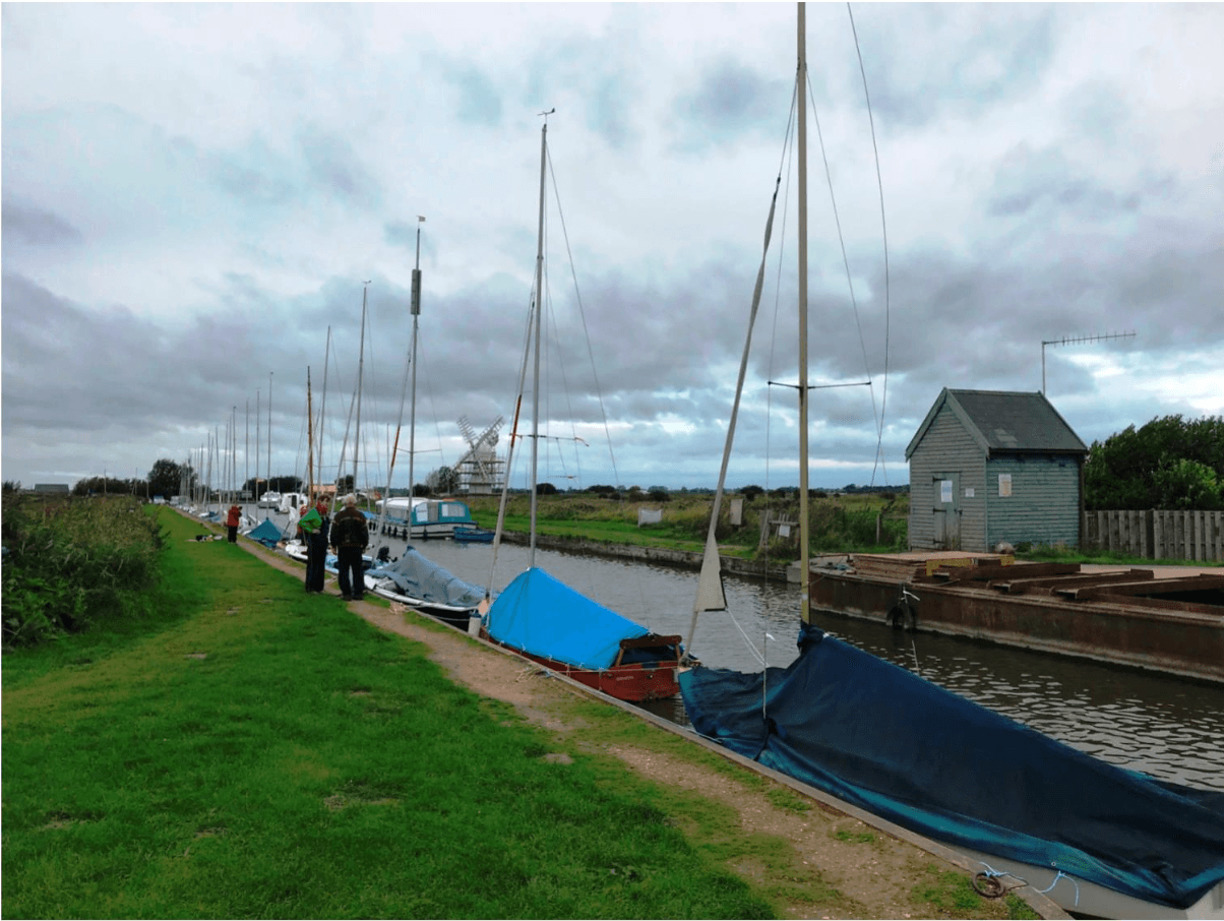 Peter and Liz Bones wrote the following report from their trip to the Wayfarer International Rally on the Norfolk Broads this year.

Not long after upgrading my GP to a Wayfarer some 5 years ago, I became aware of the benefits of being a member of the UK Wayfarer Association. I found the Association to be enthusiastic, well organised, helpful, and above all, it had a membership who were and still are, very friendly.

An abundance of all these attributes were in evidence at the recent rally to celebrate the 60th anniversary of Ian Proctor’s design of the Wayfarer.

The event took place on a very well appointed campsite set in the wooded grounds of Clippesby Hall, which is between Norwich and Great Yarmouth. We moored our boats on the Thurne Dyke which was about 2 miles from the campsite and an informal taxi service ferried us between campsite and boat every day.

Upon arrival we soon saw many familiar faces and after a very brief chat we took the boat to Thurne, where some of the organisers were there to help launch the boats and raise the masts, avoiding some inconveniently placed overhead telephone wires. Upon our return to the site we were soon introduced to members of the association from Denmark, Holland, Poland, France, Canada, USA and Ireland. It was not long before we were relaxing over a beer or two with old and new friends.

There was a marquee on the campsite where we had our morning briefings and evening social events, most of which were preceded by a trumpet call by Poul Ammentorp one of the Denmark contingent. The first evening’s event was led by a senior ranger of the broads who gave an interesting talk on the history of the broads, and provided some general advice about sailing on them. This was followed by a well lubricated and delicious hog roast.

Although I had cycled round much of the Broadlands before this event, I had never sailed them. I imagined it would be very easy with the predominantly flat terrain giving rise to constant breezes. I also assumed that most of the rivers were virtually free of tidal currents. I was wrong on both counts.

My first day’s sailing was to Horning when two people from Denmark came with me. While we enjoyed the day, it did have its frustrations.

The cruise involved a lot of beating to windward and to get the most out of each tack I had assumed it would be best to get as close to the bank as possible before going about. However I soon learnt this was not always so, as when near a bank the winds were affected by any nearby trees resulting in them being either non-existent or strong and from a different direction. The problem was compounded by an inordinate number of hire cruisers using the waterways. I was also surprised at how much stream there was. On one occasion, when tacking against a current in light airs, I realised that while I was progressing through the water, I was actually going backwards over the ground!

Over the next few days, I felt I benefitted from the experience, and also the amount of cruiser traffic dropped dramatically after the weekend. Although purists would disapprove, I chose to employ “Suzie”, my 2.5 HP outboard, rather than beat to windward. I also chose cruises on wider rivers. By the time the week had come to an end I realised that I was finding that dealing with currents, a fickle wind and other craft was more of an enjoyable challenge than a frustration.

After sailing during the days we were treated to an interesting and varied selection of evening activities. These included a talk my Mike McNamara who is the top Wayfarer helm in the UK as well as being a well known sail maker. He gave advice on getting the best performance from the boat and we also visited his sail loft on a different evening. We also had a practical demonstration on how to maintain and replace the bearings on a boat trailer, a shanty session led by a talented group of singers from Lowestoft, and a dinner at a posh venue in Norwich to which we were transported in old red London Routemaster buses. There was still plenty of time and opportunity for socialising in the bar on the campsite or at a local pub where a fine pint of the local Woodfords Norfolk Wherry could be enjoyed.

In summary, this was a most enjoyable experience and we look forward to taking part in another Wayfarer Association event in the not too distant future.